BROUN FELLINIS Kirk Peterson – Electric Bass David Boyce – Saxophone, Keyboards, Vocals Kevin Carnes – Drums, Sampler The most important thing about music is the way it makes you feel. Musicians are lucky enough to live a life of pure feeling if they can play their personal visionary music with as much integrity and energy as the spirit grants them. For the last 25 years, the trio called BROUN FELLINIS have been doing exactly this. The Fellinis innovate and disseminate their “Brounsoun”, a sonic expression inspired by the ancient to future traditions of Jazz, Rock, Funk, Hardcore, Afrocentric Hip hop, Dub, film music and African/Indian trance sounds. Notable performances include a tour with Ben Harper and co-bills with Gil Scott-Heron, Meshell Ndegeocello, the Roots, Erykah Badu, Bad Brains, George Clinton, Rafael Saadiq, Mos Def, The Last Poets, Living Colour, Zakir Hussain, Bernie Worrell, Jimmy Smith, Galactic, Medeski, Martin, Wood, Ravi Coltrane and many more. Downbeat and Spin magazines as well as NPR, KCRW, and Radio Nova in France have profiled the group. The trio has performed at the San Sebastian International Jazz Festival in Spain, the opening of the Yerba Buena Center For The Arts and the Stern Grove Festival both in San Francisco. Top venues The Independent, Yoshi’s and the House Of Blues have hosted the group and in June of 2016, Broun Fellinis celebrated their 25th anniversary at the Great America Music Hall in San Francisco. The Fellinis play this NOW music with passion, precision and soul in energetic performances that embrace freedom and structure equally. Out of nowhere, improvised themes and motifs morph into well-crafted songs with evocative melodies, exotic harmonies and infectious rhythms. It is music of the moment reflecting the lives of three exceptional musicians living and creating in the Bay Area, California.

CHARLOTTE THE BARONESS Charlotte Kaufman (aka the Baroness) grew up in the ’70s on the Southside of Chicago, where she learned how to dance before she could even walk. A funk junkie buying records and making “mix” tapes (with one turntable, a radio, and a Panasonic blue tape deck) by the age of 9, Chicago proved to be an ideal place for the unknowing funkstress to develop her cool blend of sounds. In 1979 she stood witness to George Clinton and his P-Funk Fest and then headed to her first of many nights at the Warehouse, beginning her evolution into the innovative, adventurous artist we know and love. A veteran Dj, with 30 years of spinning now under her belt, Charlotte is one of the Bay Area’s first female DJ/Producers who made a name for her self nationwide. Locally her career jumpstarted when she teamed up with the Broun Fellinis, as their official spinstress, playing in between their legendary jazz sets throughout the Bay Area. The Baroness has toured throughout the US, Canada, and the UK and has appeared with legendary artists and DJs such as the Derrick Carter, Mark Farina, Hardkiss Brothers, Invisibl Skratch Piklz, Pharcyde and Grand Master Flash. She has produced mixes, remixes and original tracks for Zoe Magic, Sunburn and Dorado. And after a long hiatus in Chicago, she is back in the Bay Area making sonic waves to the delight of old and new Baroness fans. It is impossible to attach a label to this DJ as the lady can and does play it all; from house and techno to hip hop, funk, and soul, the Baroness is famed for her skills at weaving it all together in a classy style that keeps the dance floor moving. The Baroness is one of those DJ/Producers that knows no real defining lines between genres of music–the only requirement is that the music has soul. Indeed, she knows no limits: she has none, and therefore she always manages to work up an electric frenzy in a manner that is uniquely her own. 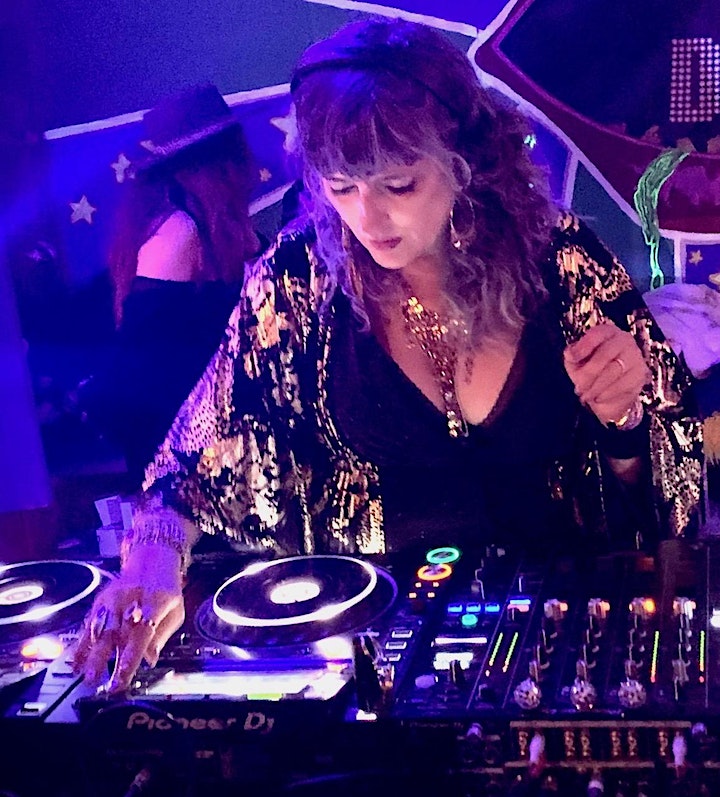